Secure Sheell is a network protocol that allows the exchange of data via a secure channel between two network devices,SSH was designed as a replacement for Telnet and other insecure remote shell, which sends the information, especially passwords, in the form of simple text that makes it easy to be intercepted. Encryption used by SSH provides confidentiality and integrity of data over an insecure network such as the Internet. Benefits of using SSH account is to increase the security of data on your computer when accessing the Internet, because of the presence of SSH as an intermediary account of your internet connection, SSH will provide encryption on all data that is read, a new send it to another server. SSH also has the ability to do Port Forwarding which allows us to: 1. Connecting TCP applications (eg web server, mail server, FTP server) more secure (safe), 2. Connecting the bypass (bypassing) the local firewall or proxy. 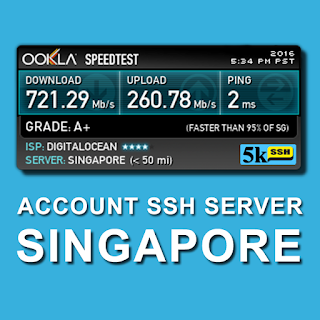 
Note: Strictly prohibited, Using it for : DDOS, SPAMING, HACKING, FRAUD and All forms of crime